The goal of this project is to develop a demo application to visualize data from the "Customer lifetime value report" from the Report Business Data Lineage Model in Mixed Reality using the Microsoft Hololens device.

Research was conducted to find out how this new technology can enhance the current Collibra platform by adding Mixed Reality visualization and functionalities to present a new model to the client.

The target group of this research is the clients of Collibra. The demo was shown to the visitors of the Collibra Data Citizens Conference on 2 and 3 of May, 2017 in New York US. The goal: convince the clients to use this technology in their company within the next 5 years. 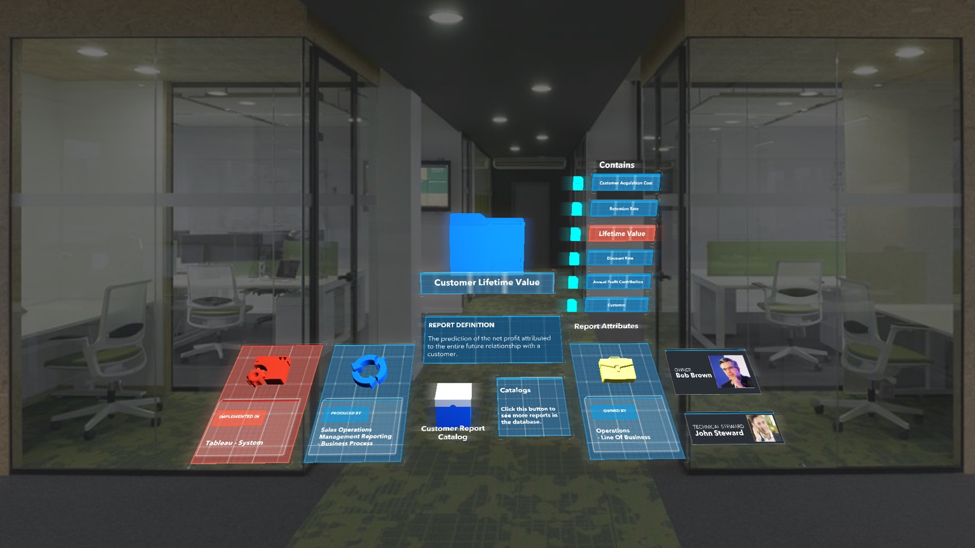 The project was created in 4 phases: concept, design, developing and user testing

Concept: The application will visualize the data from the Customer Lifetime value Report in MR using the Hololens. Different concepts were presented to optimize the visualization and make interaction possible. Design: Data visualization, properties of 3D models, interface and animations. The design was created using the brands guidelines and feedback from lead Collibra UX/UI designers. Development: The demo application was developed while conducting weekly meetings with members of Collibra. Testing: Every update of the application was tested by a member of Collibra before the demo day in New York.

Immersive visualization opens a world of possibilities for business users as it allows them to interact with the data in ways they never could before. And I believe that this is truly the future of data – especially data visualization.

The application was successfully demoed at the New York Collibra Conference. Testers of the application were confident that this technology has the potential to become a platform for Data Conferance. The current hardware, Microsoft Hololens, still has minor hardware issues which need to be resolved before this vision is possible.